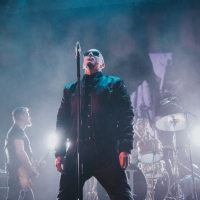 HughFreakingDillon WinnipegPosts: 32,035
June 2017 edited May 2021 in Other Music
***EDIT: I just bought a VERRRY expensive rare cassette tape (Big Wreck) that I currently can't listen to or convert. My cassette capture device is playing slow, and everything I see on Amazon and elsewhere has at least a few bad reviews with stuff not working. Anyone know of a reputable device that I could buy at a reasonable price to convert that (and all my old band jam tapes)?***

Many years ago, Ian Thornley (Big Wreck, Thornley) would post demos he was working on to his myspace account, allowing for them to be downloaded. They were honestly some of my favourite tracks by him. My PC crashed last year, and lost all of my digital music. I have been able to reclaim most of my catalogue, but these demos elude me. It was so long ago I don't even recall the track names. I know the demo of Good Times Roll was on there, which I was able to find by way of one of the old Thornley fansites (and it's MUCH better than the version Big Wreck recently released on iTunes). But the rest I can't find. Can anyone help a dude out?

edit: so, the songs I have that are not commercially available:

Ian Thornley:
Myspace demos:
-Brit Pop
-Good Son
-Let The Good Times Roll (MUCH different version released on "Bag of Tricks" Big Wreck digital EP)
-Mama
-Might Be The End
-My Heart Is
-One of Those Days
-Stop and Think

Big Wreck:
-Ill Advice (from the Much @ Edgefest 99 compilation)


I think I'll move to Australia