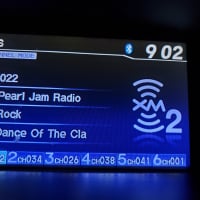 Veddernarian Posts: 1,898
December 2007 edited December 2007 in The Porch
The Envelope; Calendar Desk
A MOMENT WITH . . . EDDIE VEDDER; A LYRICAL CONNECTION; Eddie Vedder identified with Chris McCandless, the subject of Sean Penn's film. So the soundtrack came easily.
Sam Adams
Special to The Times

"INTO THE WILD" is the story of a young man who breaks away from his family and sets off to explore uncharted territory. The story of its soundtrack is much the same.

At 42, Eddie Vedder is not quite young (although, in a yellow leather jacket and band T-shirt, he looks it) and the family he (temporarily) left behind is Pearl Jam, the band he has fronted for the last 17 years. But like Chris McCandless, memorably incarnated in the film by an emaciated Emile Hirsch, Vedder chose to walk a solitary road, playing every instrument on all but one of the soundtrack's 11 songs.

Vedder didn't set out to make the album on his own, but once he started to work on the songs, they came out in a rush, and calling in other musicians would have slowed things down. "I kept thinking at some point Matt Cameron would come down and play drums on it," Vedder says, referring to Pearl Jam's drummer. "But we just kept everything moving forward. The quicker we went, there got to be a real energy to it."

From the beginning, Vedder connected with McCandless' story on a deeply personal level. Their lives are marked by a handful of striking similarities, including the fact that each had the way he understood his own family radically altered in his late teens. McCandless discovered that his father was a bigamist with a secret family on the opposite coast. Vedder was informed that the man he'd been raised to believe was his father was actually his stepfather, and that his real father had died years before.

Vedder does not discuss the subject at length but the parallel clearly drew him in. "I had things that I hated to go through as a young adult that just happened to serve me well for this job."

It's not hard to hear an echo of the righteous anger in Pearl Jam's songs when Vedder describes the disillusionment that sent McCandless on his journey. "The people that he trusted, and the world that he trusted, he felt betrayed by," Vedder says. "He felt like there were things in the world that were wrong, and he probably felt that at home too." He also relates to the paternalistic bond between McCandless and Hal Holbrook's widowed veteran, a mirror of his own friendship with the late Johnny Ramone.

Working on "Into the Wild" brought Vedder back to his earliest influences. The album's layered sound was inspired by Pete Townshend's demos for the Who's "Who's Next," which demonstrated that one man with a multitrack tape recorder could make as much noise as a full band. "That was a mind-blower for me," he recalls. "To hear the impetus and the core of that stuff and realize that one person could orchestrate his own music like that, that was a great case to study, plus those were my favorite songs in the world."

Vedder also took a cue from watching Neil Young turn an initial inspiration into a full-fledged song in a matter of minutes. "I've put it into practice on a song here and there, just grabbing something and turning it into something immediately," he says. "Getting a spark, grabbing it, one hour later -- song. But never on a body of songs like this one."

Vedder is reluctant, at first, to venture a guess as to why the songs came so quickly. He launches into an explanation several times, then retreats and starts over, as if seeking just the right approach.

"I haven't said this yet, for the reason that it might be taken the wrong way," Vedder says. "But I shouldn't be shy. I should be proud of it. And it's not being proud of myself. It's being proud of whatever happened."

What happened, Vedder says, is that he started to feel more like the songs' conduit than their author. "It felt like other things were at work," he says. "Things came through, musically and lyrically, that I didn't have to do too much work with. It felt more like grabbing little sparks around my head and putting them on the fire."

Although inspiration came quickly, Vedder took his time arranging the songs, changing tempos and adding instrumental verses to fit them into Penn's nearly completed movie. "I didn't want to say, 'It's a minute and a half scene, but here's a five-minute song -- take what you want,' " he says. "I wanted to make it as easy as possible, give him a piece of music that he could just play where he wanted it to start and end where he wanted it to stop. I just wanted him to be able to get it and play with his kids."

The movie already had music in it when Penn sent it to Vedder with a request to add one or two songs to the mix. Despite his confidence in his initial submissions, Vedder was prepared for rejection. "I liked what we had done, but I was ready to be told, 'Thanks, and hope this doesn't jeopardize our friendship, but I'm going to stick with the other stuff.' "

Instead, after leaving the studio late one night, Vedder was awakened early the next morning. "I blearily woke up to a phone call from Sean saying he had already put two pieces in the movie, and maybe we could do five or six more and think about the theory that the singer could be the interior voice of the character," he says. He began to think of the album as a way to retell the movie's story in miniature, like the songs for "Harold and Maude," another touchstone for the teenage Vedder. When he found out that movie had no soundtrack album, Vedder bought the necessary Cat Stevens records and assembled his own.

Although the two have been friends for years, Vedder still speaks of Penn with a degree of awe. Having seen Penn regale guests with a late-night recitation from a Phil Ochs song, Vedder strove to be worthy of such a moment. "He makes songs sound like poetry," he says. "When I was writing, I was thinking, 'This has to be good enough for him to recite to one of his friends at 4 in the morning.' "

The release of "Into the Wild" has stirred up some of the resentments that greeted the publication of Jon Krakauer's book, from those who see McCandless as a spoiled rich kid whose headstrong cockiness amounted to a death wish. But Vedder has no doubt that McCandless intended to survive his Alaskan adventure, drawing a comparison with his own preferred way to get back to nature.

"I don't think a guy goes out to surf big surf and thinks that he's not going to come back in," he says. "I think McCandless was out to catch big waves, and he wanted to challenge himself. He was going to, as all of us hopefully will do in our lives at some point, take it to the edge, to find out where the edge is, and find some truth in it all. And then you come back, not just to share your knowledge, but to become a different person, and that's how you contribute to society. These aren't just romantic journeys. They could be considered integral to becoming a more fully realized human."

Vedder's solo voyage has taken him down new paths. He has been mulling over the idea of a string of solo dates, the better to experiment with ideas that might not go over as well in the stadiums Pearl Jam usually plays.

"At my age, I want to keep getting better," he says. "I don't want to say this is it. We'll still keep playing, but this is the end of our growth. So this would be a way to grow a couple new branches or something."

PHOTO: INSPIRED: After he saw the film, the songs started to flow for Eddie Vedder. "It felt like other things were at work.";PHOTOGRAPHER:Peter Tym For The Times;PHOTO: CHANNELING: Emile Hirsch plays Chris McCandless, a student and athlete who abandons his possessions to live in the Alaskan wilderness.;PHOTOGRAPHER:Chuck Zlotnick Paramount Vantage;PHOTO: COLLABORATORS: Director Sean Penn had friend Eddie Vedder treat the music as the character's inner voice. Vedder wrote scene-specific songs.;PHOTOGRAPHER:Alberto E. Rodriguez Getty Images;PHOTO: (S3) Sean Penn sent his friend Eddie Vedder a copy of "Into the Wild" and asked for a song or two; Vedder gave him a soundtrack instead.;PHOTOGRAPHER:Peter Tym For the Times
Up here so high I start to shake, Up here so high the sky I scrape, I've no fear but for falling down, So look out below I am falling now, Falling down,...not staying down, Could’ve held me up, rather tear me down, Drown in the river
Post edited by Unknown User on December 2007