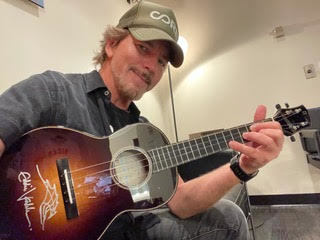 Handcrafted by Colorado-based luthier Beau Hannam from Empress (Paulownia) wood grown on President Carter's farm in Plains, Georgia, and with a spruce top, is one of only two ukuleles in The President Carter Legacy Collection.

As the first person to play the instrument, Eddie Vedder was so impressed with the quality of the sound, he wrote a note to luthier, Beau Hannam, stating:

"Just wanted to say how much I appreciated playing this incredible uke. It was obviously made with deep care and fine artistry. You could feel it in the hands and hear it in the tone, blend, and balance. And the design, impeccable.” - Eddie Vedder

The President Carter Legacy Collection of 8 stringed instruments, made from the trees grown on President Carter’s farm, was created to honor the 39th President of the United States’ ongoing commitment to building a sustainable future. Not only was he the first man to put solar panels on the roof of the White House, he pioneered the farming of a non-invasive variety of Paulownia in the United States. Paulownia is one of the world’s fastest growing hardwoods; a tree that reaches maturity in as little as 10 years and regrows from the stump multiple times without replanting, making it a truly renewable resource. As the stringed instrument industry faces increasing shortages of traditional tonewoods, farmed Paulownia is primed to become a viable alternative tonewood in the future. President Carter remarked, when presented with the completed collection:

“It is my hope that these instruments bring happiness to all who both play them and hear them and that they inspire us all to pursue a more sustainable future.” Jimmy Carter.

In this clip, President Carter gets to hear, for the first time, what a renewable resource sounds like. The collection received the Presidential Seal of Approval.

Proceeds from the auction will benefit two charities very close to President Carter’s heart: Farm Aid, founded by his long-time friend Willie Nelson, which advocates for fair farm policies that promote resiliency, sustainability, equity, and diversity across our food system, and the Jimmy and Rosalynn Carter Unit of the Boys and Girls Club of Albany, an organization that enables young people (especially those who need it most) to reach their full potential as productive, caring, and responsible citizens.