Sometimes A Little Means A Lot 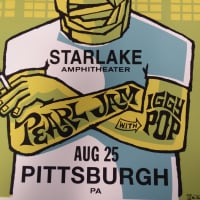 tommy boy United StatesPosts: 536
December 2020 in Words and Music...Communication
So l'm not the one to ougle over hearing PJ play a rare song, or something l haven't ever heard before "live" or some B side they never played before, but here is just a little 'feel good prose from 'The Palace' from 2000.  First of all,l thought l was going to run out of gas because l was going through Canada and l could Not find a gas station.  Seriously, running on fuems. Eventually, that crisis was overted.
I got there so Early that l pulled in and was asked if l'm 'loading or staff' and like an idiot , l said no.
Anyway. Being a Long time Jordan fan l carried a chip on my shoulder bc l hated the Pistons and Detroit.
The whole point of this story is that l only had enough money to go to the show, had a 5 hour ride back to Buffalo, didn't want to drink bc of that, And had no money for even a souvenir.  It didn't matter. I just wanted to see my friends perform.
Obviously, we are not "friends", but back in that day, it's how it felt. Like we were all fighting, living in this world together.
That's why l want to say to the band, thank you.  Obviously, the scale is tipped on your end, but, it's a tetor toter-tater- lol.
My whole point is that after seeing the show in Albany, Pitt, and Toronto, l made the trek to the Palace by myself and the song l am going to play next on vinyl is Parting Ways.

That was cool. A great Memory.
Miss my friends and the community and sharing some good times and music, but we will be together soon and it's gonna be awesome.
Stay positive, Stay Creative, Stay Patient.
Happy Holidays to you all and play Parting Ways for Tommy Boy.
It's a Long story, but one that keeps re-writing.
Love .
TB
1996: TORONTO, TOLEDO, BUFFALO
1998: BARRIE, PITTSBURGH, CLEVELAND*, MERRIWEATHER POST
2000: TORONTO, PITTSBURGH, DETROIT, SARATOGA SPRINGS
2003: TORONTO, BUFFALO*, CLEVELAND, MSG 1
2004: TOLEDO, GRAND RAPIDS
2006: PITTSBURGH
2008: HARTFORD
2009: PHILLY II
2010: BUFFALO
2013: BUFFALO
2014: DETROIT
2016: NYC I NYC II