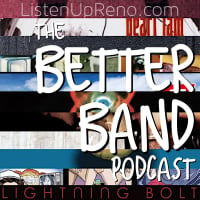 Branden NevadaPosts: 218
January 2020 in The Porch
Now that the band has gotten everyone hyped with the forthcoming tour & album, I think it’s about time to start to take a look at the next two albums/seasons for the Better Band podcast, and cast the net to see who would like to talk about NO CODE and YIELD…
https://forms.gle/v1mTmFbNpS3y5y5c9
I’m thinking NO CODE episodes will record from mid-February to the beginning of April, and will be released from May-July, and YIELD episodes will record the beginning of June to the end of July, and will be released from August-December. So keep that in mind along with their tour schedule, and where you plan on being during those times.

I'm always looking for new people to talk to about Pearl Jam (as our buddy Yusuf said: "Don't be shy..."), so don't feel like you have to sit back & let life happen TO you.
The Better Band Podcast: BetterBandPod.com
Apple Podcasts: https://apple.co/3yVFPcY
Google Play: https://podcasts.google.com/feed/aHR0cHM6Ly9tZWRpYS5yc3MuY29tL2JldHRlcmJhbmRwb2QvZmVlZC54bWw